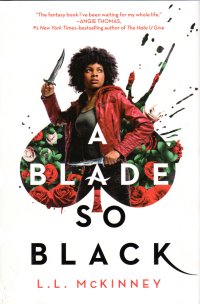 I bought this book at LibraryCon this year and picked it up first from amongst the gleanings.

I remember noticing that this book, unlike the others at the convention, was hardback with a dust jacket. Most self-published authors go with paperback. When I cracked it open, I discovered that it was actually published by an imprint of Macmillan Publishing. The back flap talking about the author said she was into equality and inclusion in publishing and that she created a #Hashtag, and I thought uh oh. I feared it might be a modern science fiction or fantasy with a message. Fortunately, it is not.

It is a good story. Basically, yes, it’s Buffy the Vampire Slayer in Wonderland. A young woman, grief stricken at the death of her father, is attacked by a fantastic creature and is saved by a man from Wonderland. Not the Executioner’s man from Wonderland; an exiled resident of a fantastic world who bears a dark blade. He teaches her to be a Dreamwalker, a person from our world who goes to Wonderland to kill Nightmares, which are manifestations of human fears that are more frequently plaguing Wonderland. Alice has allies in Wonderland–other Dreamwalkers who guard other places where the two worlds intersect–but they discover a growing danger from a mysterious Black Knight who wants to resurrect the Black Queen to rule Wonderland.

The only quibble I have with the book is that the climactic battle at the end comes up and is dispatched very quickly–which, as you know, gentle reader, is a common complaint I make. The book too clearly leads into the next in the series, which means the end doesn’t really resolve that much in the story arc.

But that’s a minor thing. The story moves along well, and the author not only relies on the Alice in Wonderland story for a jumping-off point, but she also alludes heavily to “The Jabberwocky” as well. And she titles her chapters in addition to giving them numbers–a practice of which I approve.

But I’ll pick up the next in the series when it comes out next month. And I will pick up a copy of both books for my godson for Christmas since he likes fantasy novels. Or so I hope–because every year, he still gets them from me.

If only the author would do a book signing at ABC Books so I could get the books signed.