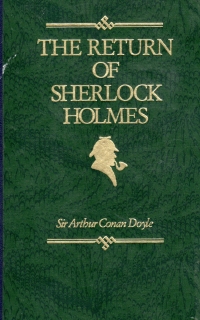 It’s the strangest thing: I could have sworn that I just read the first collection of Sherlock Holmes stories, The Adventures of Sherlock Holmes, recently. But a quick search of this blog and the spreadsheet I use to track my accumulated reading since 2009 indicates I have not apparently read that collection in the last sixteen years. I even looked at my recently read bookshelves to see if I had missed it in my electronic tracking, and I had not. My book database software indicates that I have two (!) editions of the first collection, including one by Reader’s Digest that I remember so clearly.

So I don’t know why I thought I’d read it recently. Perhaps because I just read The Man Who Knew Too Much last year. Maybe I’ve even got another copy of The Adventures of Sherlock Holmes floating around that I’ve seen recently on my to-read shelves.

This book tells the story of the reanimation of Sherlock Holmes by the Romulans (sorry, wrong book) a collection of stories about Sherlock Holmes set in the 1890s after he makes known to Watson that he did not actually die in “The Final Problem” but faked his death so he could hunt for those who wanted him dead. The book includes 13 stories that vary in tone and resolution; they’re pleasant enough to read, but too many of them in a row became a little tedious for me.

From a historical perspective, although we think of Sherlock Holmes as gaslight era, the last of the Holmes yarns appeared in print after the first Agatha Christie Hercule Poirot books appeared. The latter seem so modern and the former so old-timey. Partly that is because the last of the Holmes stories were a bit of an anachronism when they appeared, and Christie wrote of the modern world with cars, telephones, radios, and in her later works more modern technology yet. It highlights, though, the vast changes that occurred in England and in the world between the end of the nineteenth century and the 1920s. Of course, if you’ve watched Downton Abbey, you’d be aware of this as well.

In “The Six Napoleons”, part of the investigation deals with Italian immigrants, and one of them is suspected of being Mafia. So Sherlock Holmes is a forerunner of Mack Bolan. Face it, we’re one encounter with a young man named Broz from Sherlock Holmes touching all the greatest 20th century detective/heroes.

I marked a couple of other things:

At any rate, an enjoyable read, but probably best read a story or two at a time.