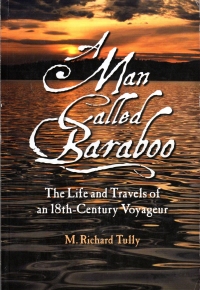 When I bought this book in Baraboo, Wisconsin, I thought it was a local history book. That’s not exactly what it is. It first tries to determine where the name Baraboo comes from, from the word for catfish, beautiful sandbar, or a vine.

The book eventually settles upon the theory that the river took its name from a French Canadian trader, François Barbeau, who set up a trading post on a bluff on the river. He traces Barbeau back to his youth and then to his military service at Fort Michilimackinac, from whence he received a commission to conduct the trading expedition to southwest Wisconsin (which, of course, was not yet Wisconsin).

The book weaves a lot of history from the colonial period into a narrative of traveling by canoe from the junction of Lake Huron and Lake Michigan across lakes and rivers to a trading post where they collected furs all winter and then returned when the ice broke up in spring. You get sidebars about equipment, lots of discussion of the native tribes in the area, and whatnot.

It’s a pretty good, relatively short (180 pages) narrative from a long stretch of time that gets pretty short shrift in history books and classes. I enjoyed it a bunch.

If I had read it immediately, I could have visited Fort Michilimackinac when I was in Michigan last year. Ah, well. Maybe next time.