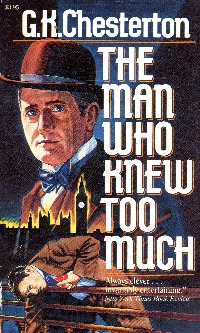 I picked up this book because I’ve heard of Chesterton, of course, and because I’m a big fan of the Bill Murray film The Man Who Knew Too Little. So this book is a two-fer: An intro to Chesterton and the knowledge of the source of the trope. It had been facing out of my hallway to-read bookshelves for a while, and I picked it up, hoping to get through a collection of short stories quickly. Oh, but no.

This volume collects eight connected short stories. Horne Fisher is a member of a well-connected British family whose members include several high-ranking government officials. Horne is the odd duck of the family, a dilettante that knows a lot of things and a lot of things about people. In each of the stories, someone gets murdered, and Fisher gets to the bottom of it, but the murderer goes free for the greater good of the country somewhow. Fisher has a confidante in journalist Harold Marsh who hears the crime solutions but also does not take action at his friend’s behest.

The style is a bit stilted, a bit more targeted perhaps to the aristocracy or to the intelligentsia than, say Rudyard Kipling or popular translations of Jules Verne. So I found it slower to read and easier to put down, which is why it took me a while to read the whole book even though it’s only 160 pages. I’d read something else in the interim and then a story in this book. This approach kept it from becoming too tedious.

At any rate, perhaps not the best lead into Chesterton’s work. Less approachable than Christie, and given that the criminals do not receive justice, unsatisfying. I was probably hindered by not knowing the exact period in which this was going on nor the conflicts alluded to. Even watching the entirety of Downton Abbey did not prepare me adequately. And I couldn’t hear Michelle Dockery’s voice reading it aloud (unlike Cotsold Mistress, where my imagining it helped me get through the book).

Still, I can say I’ve read some Chesterton now, which probably makes it worth the fifty cents or dollar I paid for the book. You can find fairly inexpensive editions on Amazon as noted below.