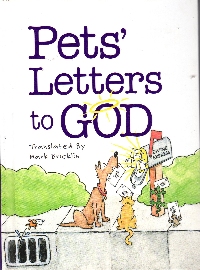 I bought this book on Friday, and in that very post I pointed out the lack of recent book reporting. So I grabbed one of the thin, browseable books from that stack and flipped through it even though it’s a bye week for the Green Bay Packers.

This book collects a number of little letters as though they were written by pets to God. There must be some sort of cutesy collection of children doing this sort of thing for this collection to piggyback on, but I’ve avoided it. Probably for similar reasons that I like jokes with talking dogs but not talking children. Which was true even before I had children of my own.

At any rate, the book is about what you expect: something along the lines of I Could Pee On This and with about the same amusement factor. Which is to say some things were amusing, most were not, and I didn’t get dumber reading it.

So worth your time if you’re me. Or if this is your bag, baby.

Interesting note: The author’s bio indicates he is the former editor of Pets: Part of the Family, Prevention, and Men’s Health magazines. Actually, that’s all the bio. One would think a former editor would have weightier things to write about, but I guess not. Or this fills the time and the bank account. Maybe he’s a professional. Unlike your humble host, who mostly writes this as a gift to myself in four years, when I’ll page through these posts and find them amusing in an I Could Pee On This way. If, in four years, I can still access this site given I’m not sure how to convert it to https.