I can explain that thing on the sink. 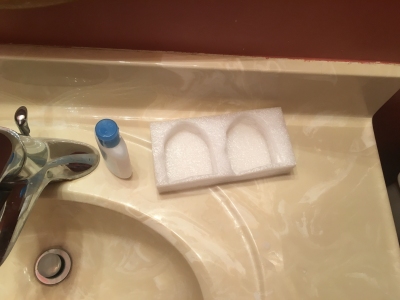 For starters, “The Thing on the Sink” is not an H.P. Lovecraft short story, although with a title like that, it might be a good one.

No, this particular thing on the sink has travelled throughout the lower level of our home with feline assistance. I hope. Otherwise, it might be something out of a Lovecraft story.

I not-so-recently changed the toner on my black-and-white printer (which is why I’m not afraid to throw extra hyphens into this blog post–I have enough toner to print them if needed). I’d bought a two pack of the the toner cartridges on the Internet, and they came in a box with foam packing at the ends. I’d already used the first of the two toner cartridges and had taken it to Staples, where I would eventually get a $2 coupon to use in thirty days that I would not actually use because I only go to Staples to recycle toner cartridges for the two dollar coupon that I never use. It doesn’t make much sense to me, either, but that’s what I do.

Since I used the second cartridge, I took the foam ends out of the box because I save foam packing like it in case I need to add filler material to a project I’m working on, but I never do because I’m lazy and haven’t done anything with a monitor bezel in years, but I’m still accumulating foam for my next project in a couple of years.

So I left the foam ends in my office, and one or more of the cats decided one of them was a cat toy. So it made its way from my office into the living room, and then into the hallway between the living room and our offices. I picked it up off the floor to vacuum and put it on the cat tower in the hallway, meaning to take it up to the garage at some point in the future. But I didn’t before one or more of the cats took it from the tower and into the bathroom, from whence I put it onto the sink.

See, it makes sense. And, one day, it might make it into the garage to get used in a project, or more likely, to be saved for a project I never get around to.

You see, I can explain the seemingly random placement of seemingly random things at Nogglestead. Basically, it boils down to one or more things, sometimes in combination: Cats, children, and/or laziness.

Also, I just wanted to let you know that sometimes I know what something odd laying around is, unlike that one time or that other time.