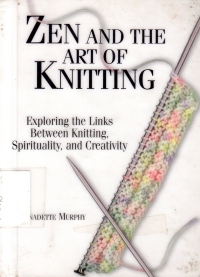 I read the original (Zen and the Art of Motorcycle Maintenance) earlier this year, and I told someone (probably the precocious kid at my martial arts school who like to read philosophical works, or perhaps my beautiful wife) that I wanted to read that volume so I could read this sequel to it, as this volume was on the outer rank of my to-read books in the hall and was hence present any time that I went looking for a new book to read and did not have something I’d bought that week that I wanted to jump right into. As you can tell, gentle reader, my Web host offered me a good deal on italics this week, so watch this space for their overuse.

It’s not a sequel, of course; it’s one of the books that play upon the title of the Pirsig work and call themselves Zen and the Art of something.

In this case, it’s knitting. The author does play up some of the mindfulness and “in the zone” elements you can get into when you’re sort of focusing on your knitting, but when the habits of the hands leave the mind free to wander or not.

However, this is not a particularly compelling book.

It really doesn’t have much to say aside from the description above; each chapter doesn’t really build upon a theme. Instead, it’s a series of interviews that the author has with creative professionals, educators, or her aunt the nun about what knitting means to each. Which is generally that they can express themselves and become mindful when knitting.