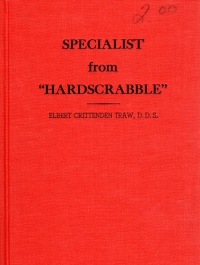 The title of this book might fit onto one of the men’s adventure paperbacks I favor or perhaps one of the series Westerns I infrequently indulge in, but instead it is a collection of reminisciences published in the 1940s or 1950s from a man born in 1875 and a graduate of the Washington University School of Dentistry in 1904. So maybe the book is from the 1960s or 1970s, but most of the stories within it come from the late part of the ninteenth and early part of the twentieth centuries.

The book doesn’t move in chronological order, so we get stories of his growing up on a farm following stories of him working for the streetcar line while going to dentistry school. In addition to the memoirs, we get some natural science musings as he talks about different animals he’s seen and killed as well as health musings, including a chapter on constipation that leads to some, erm, novel remedies (and, after bladder trouble, he mentions that he doesn’t drink much water, so 100 years later, we can probably give him a better solution than the ones he recommends).

It’s a bit like listening to an older relative tell stories. I enjoyed it because I like these sorts of books, as you know, where real people put together their recollections and diaries and describe their world more plainly and accurately than historians or historical filmmakers can. What’s most striking about his life is not so much the hunting and fishing stories, but the times he talks about casual brawling with his associates and friends. They’d just start fighting for fun, and Dr. Traw had a long memory for men who whopped him, and he’d just sometimes get them back by starting to throw punches. As an adult. Maybe radio killed this pastime for rural America for the most part.

One thing I’d like to note is that this book ostensibly takes place 40 years or so before E.M. Bray’s Growing Up In The Bend, but how remarkably similar the lives were in the use of farm machinery, wagons, and rural life. It really illustrates how disruptive and changing the 20th century was. So far into the 21st century, we’re nowhere near that on technology. On politics and the future of the country, maybe more so, because that doesn’t require math.