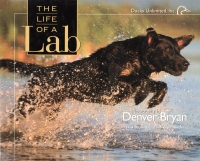 I bought this book over the weekend, so it went right to the top of the stack of browse books on the table beside the football-watching sofa perch, so I got right on it while the Green Bay Packers played a sloppy game against a not-good football team, leading one to wonder if this year’s Packers are also a not-good football team.

So I had plenty of time to browse a book.

This book, as the title indicates, is a photography book that covers the life of Labrador Retrievers (not just one lab, but the Lab. It has chapters on puppies, adolescents, prime hunting dogs, and then senior dogs. I think they’re missing a Cycle level in there somewhere, but there you go. Each chapter has text talking about that stage of a dog’s life–a bit much text if you ask me, but I was trying to watch a football game. The book mentions that the breed is the most popular in America and most of them are not hunting dogs, but the photos and text focus on the hunting dog. It is a Ducks Unlimited book, after all.

Full disclosure: I am a Ducks Unlimited member and have been since probably about the time this book was published. Mostly I do it in honor of my father, who was a duck hunter (but owned a Golden Retriever, not a Lab). In the old days, I joined so I could buy a camouflage Ducks Unlimited hat to put on my father’s grave, but I’ve kept my membership mostly up to date in the intervening years to support their conservation activities and in memory of my father. Although I’m not a duck hunter myself and don’t really plan to take it up.

The book did make me want a dog, though. It’s been almost twenty years since I had a dog, the only one I owned in my adulthood. Horatio was a black lab mixed with a smaller breed, some neuroses, and perhaps some brain problems that led to his early death at a little over a year old.

Hrm, the book report is less about the book than about what the book made me remember. I suppose that’s more benefit than I get out of many of the books I read.