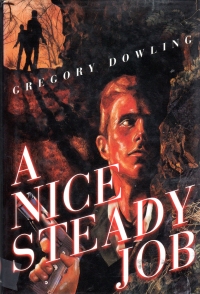 I picked this book from my to-read shelves because, whenever I turned around at my desk to talk to my beautiful wife, the red dot that indicates that it was a dollar book I bought from Hooked on Books once upon a time (probably before this blog existed, werd). I’m very conscious of the red dots these days since the current employees at Hooked on Books don’t know what they meant. So when it came time for a new fiction book, I finally settled on it, unsure of what I was getting.

As it turns out, it is a British private detective novel. For a moment, I had some reservations given how little I really enjoyed my last British mystery (Cotswold Mistress from almost a year ago already). But this book’s tone is more akin to American private eye books with a British sensibility to them rather than an Agatha Christie ministers-and-gentlemen-dying locked room thing.

The protagonist, January (called Jan) Esposito, is a bit of a ne-er-do-well loafing about in Italy and teaching English to Italian students. He’s got a hustler of a half brother, with whom he had a previous adventure that led them to believe he could be an adventure or private detective, so when the son of a gentleman goes missing, the Sir reaches out to the half brother, who enlists Jan to go to a small village in Verona to look for the young sir-to-be who is suspected of murdering a local. When Jan gets to town, he meets a young researcher who is not who she claims she is and some local toughts.

It’s a pretty good read, a slower paced book than an American detective book even of that era, but it moves along nevertheless. Of course, Jan uncovers conspiracies and cover-ups that go all the way back to The War (World War II), a partisan plan to recover a religious statue stolen by the Nazis that goes missing when the Nazis burn the house where the partisans hole up after the raid, and a plot to arm a new revolutionary group planning attacks in the modern day. It gets a little convoluted at the end, but a lot of other detective books do get into their plots.

A fun read, and certainly worth a dollar twenty years ago, although in contemporary dollars, that’s probably like $20. Probably still worth a dollar, and you could probably find it for that.

Apparently, this author wrote three books in the 1990s, of which this book is the last, and only recently returned to novels with a couple of historical thrillers set in Italy. Which probably means I won’t find a vast catalog of his other work in book sales here in town, but I will certainly keep an eye out for them.