I’ve reached an age where decades are a drop in the sink beneath the mirror in which my face suddenly sags. You know, a couple years ago (six being “a couple,” where ten is “a few”), I started a category on this blog called DeRooneyfication, which covers projects I’ve completed after the passage of time. It’s not a very big category, sadly, as so many projects remain incomplete.

But what’s rather striking to me today is the copy of Montaigne’s essays atop my dresser. 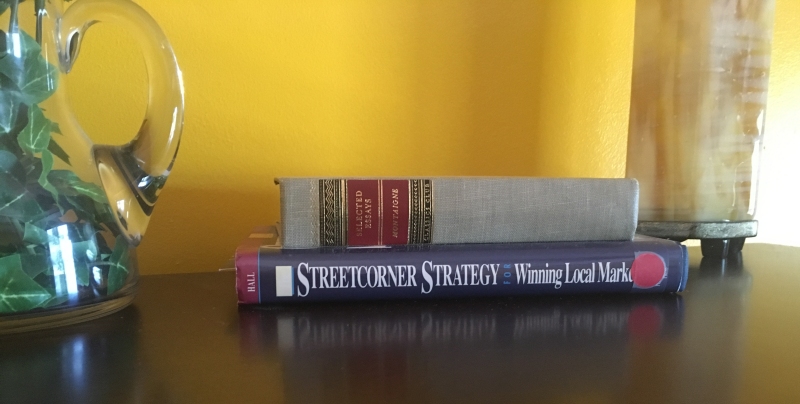 You know when I set it there?

I carried that book on one of my trips to Kansas City the beginning of last summer. I read a couple of the essays in the beginning, and then I laid the book aside for later reading.

And a year has passed. I’ve moved the book to dust (infrequently), but it’s been atop my dresser for a full year. It sits there with the rotating cast of carry books that I put in my gym bag when I make my (infrequent) trips to the martial arts school, (weekly, mostly) trips to church where I can read the book over the Sunday School hour, or to various sports practices where I sit in the bleachers while my child or children run around. A book of poems that I take out to read on the deck sometimes at night joins the stack. But the Montaigne? That’s been a year.

I don’t know what it says that books that I pluck from my shelves to read sometime languish on side tables or dressers for years before I pick them back up or, in a fit of cleansing, put them back on the to-read shelves. But a year.

The vertigo of passing time that I get from these realizations might explain why I don’t open my nightstand drawer. Within it, a couple of poetry books I started to read to my children when they were very young, when I would read poetry to them while they played their toddler games, reside. Pablo Neruda and Ogden Nash en media res. I haven’t lived in this house for a decade (yet), but these books might make it a decade in the nightstand before I find them or before an estate sale appraiser looks them over and marks them fifty cents.