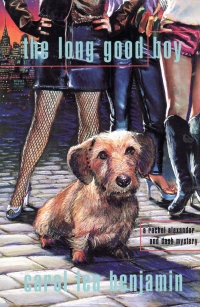 After reading a book about magickal cats who solve crimes, it only seemed fitting to turn to this book, which I just bought in March, which features a private investigator (Rachel Alexander) and her pit bull (Dash) who solve crimes. Dash, it should be noted, does not talk. Also, note I read an omnibus edition of a couple earlier books in this series in 2009.

At any rate. In this book, Rachel is hired by a trio of transvestite hookers to investigate the murder of one of their colleagues in the meat-packing district of New York City. She finds that a manager of a local meat plant was murdered around the same time, so she wants a look into the files of the plant. She spends many pages teaching a dachshund belonging to one of the prostitutes to unlock a bathroom window so she can break in and fax files to her home line. The meat plant might be tied up in mob activity. The plant’s assistant manager, who was passed over for the job when the murdered manager was hired, is a frequent client of the prostitutes, including the one who was murdered.

Much of the book is spent in chasing down or set pieces that don’t really amount to much. The whole plant break in thing takes a long time, and then Rachel is outfitted as a hooker and spends a couple nights on the streets for no real reason other than to explore the experience, and then in the last third of the book, she finds out not so much that family secrets are involved and a couple of failed police stings, and then the book wraps up in a rather abbreviated and confusing climax.

Still, it was an enjoyable read. The pacing was good, even when it was going nowhere. I liked it enough to maybe pick up another the next time I find it for a buck.

Robert B. Parker created the Sunny Randall series to be adapted by Hollywood for Helen Hunt, or so I heard. I wonder why this series hasn’t been optioned?

Also, as a side note, the topic matter and discussion of transvestite and pre-operative transgenders: Although this book is sensitive for 2001, how insensitive is it in 2018? If the chronically offended read old books, perhaps we would know. And the answer, likely: INTOLERABLY!

(Also, if you’re interested, here’s my book report on the book whose title is the source of this book’s title: The Long Goodbye.)