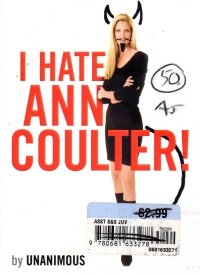 What a mean-spirited, insipid little book this is.

Of course, with a title like I Hate Ann Coulter!, what would I expect? Probably something akin to Rush Limbaugh Is A Big, Fat Idiot by Al Franken, which is also floating around on the shelves somewhere here.

I’ve not been a fan of Coulter. The only book of hers I’ve reviewed here was Godless, although I might have read one of her earlier books before this blog–although it’s hard to imagine any life before this blog. I know she was kind of popular with the early blogosphere, but I don’t think I’ve seen anything linking to her in quite some time. Her books are quite incendiary, with a bunch of name calling and near-nastiness that’s supposed to be humorous as she makes her points.

But that differs from this book, where nastiness is the point, and the author or authors do nothing but lay into Coulter’s looks and whatnot. They insinuate she’s a man. You know, the kind of thing that in the year 2018 would be doubleplus ungoodthink, but only if not targeted to Ann Coulter, apparently.

The times when they bother to attack her credibility as a commentator, they mock Coulter’s points that time has borne out. Such as:

Ann makes the wonderfully deranged contention in Godless that a liberal, when questioned, “might turn violent–much like the practicioners of Islam, the Religion of Peace, who ransacked Danish embassies worldwide because a Danish newspaper published cartoons of Mohammed.”

Well, we’ve seen an uptick in political violence from the left in the intervening years, ainna?

Or the stunning ignorance on offhanded display, such as an assertion in a quiz to see if you’re like Ann:

6. Does it bother you as a Christian that Jesus never kicked anyone’s ass?

Seriously, kids? Have you never heard this story?

The Passover of the Jews was near, and Jesus went up to Jerusalem. In the temple he found people selling cattle, sheep, and doves, and the money changers seated at their tables. Making a whip of cords, he drove all of them out of the temple, both the sheep and the cattle. He also poured out the coins of the money changers and overturned their tables. He told those who were selling the doves, “Take these things out of here! Stop making my Father’s house a marketplace!”

You’re refuting Coulter’s point about liberals being, well, Godless by demonstrating a relatively common story from the Bible.

My goodness, I cannot believe I read this. Well, no, I can. I read anything, and this little stroll through the gutter did not take me very long, fortunately, and my book count this year needs some padding.

I would recommend you not bother. Go visit Twitter if this is your thing. No doubt the author(s) of this book have a sweet feed somewhere over there where they DESTROY and OWN conservative commentators all day long.