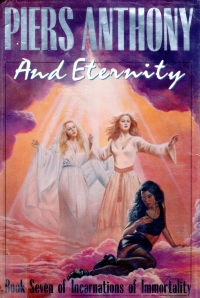 In my book report on Job: A Comedy of Justice, I said:

You know, trying to weave actual theological entities into fantasy novels is most often a real mess (see also Anthony’s Incarnations of Immortality series, the for-a-while-last, but now penultimate, book dealing with God somehow–I’ve not made it through that particular volume).

Didn’t you once write a short play set in Heaven with God drinking at a bar? That wasn’t fantasy. That was supposed to be funny. But probably only was to a certain small set of collegiate drama writers, wherein that set might have been exactly one. Given how my humorous plays

At any rate, I picked this book up again and tried to power through it. The last time I got a little caught up feeling squicky with the age of consent philosophical treatise culminating in sex with an underage girl bit along with not remembering what was going on in the series business (apparently, I read the preceding volume, For Love of Evil

before I started this blog, so it was some time ago indeed). Between those two factors, I put this volume down and went onto other things. But with the reading of Job, I thought it might be part of a brief theme. Not outlier sex practices, though: more “Actual theological entities in fiction.”

This book deals with the (I assume) long-running series business of a plot to unseat God by Satan. I assume it’s series business. To be honest, I read the first three or four books in the series in the middle 1990s, the fifth book a couple years later, and the sixth sometime around the turn of the century (but apparently before I began the blog–was there such a time? Was it real?).

In this book, a ghost companion of Orb, the incarnation of Nature (Book 5, read twenty years ago) and the consort of Satan (Book 6, read fifteen years ago) who is also married to Orb (Book 5 or 6, but I’ve forgotten which) has been tasked to watch over a woman who was tied to Chronos (Book 2, which I read ca 1994) who is saddened when her baby dies. She commits suicide, and starts to sink to Hell until the companion of Orb (Jolie) catches her and keeps her from descending. The incarnation of Night (Nox, book 8 which was published in this century) snatches up the soul of the child and will return it to the distraught mother if she (Orlene) completes a quest. The two spirits inhabit the body of the aforementioned teen girl, an addicted prostitute whose mother is important to fighting Satan’s plot because MacGuffin. The now-trio must complete the quest, which is to collect something from every other incarnation.

So they do, and they must visit every incarnation in its native habitat to secure the gift, and work toward maybe thwarting Satan’s plot or identifying a candidate to replace God in case Satan’s plan gets that far. I saw the ultimate twist pretty early in the goings on in my second go-round with the book, so the eventual denoument (there really wasn’t much of a climax) didn’t surprise me much.