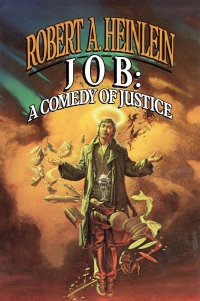 This is a later Heinlein novel. Published in 1984, it has a heft to it that the earlier rocket jockey stuff had, but it’s a bit boggy and ends less than well from my perspective.

The story: A fundraiser from a world where religious fundamentalism has its way is on vacation cruise when he bets fellow passengers that he could walk on fire like the south Pacific natives. After he does, he faints from the fumes, and when he awakens, he is not in his own world any more. Things have changed, from the underlying technologies to the name by which his fellow passengers recognize him. He discovers that his alter-ego in this world is carrying a million dollars in cash and has been having a (sinful!) fling with an attractive ship’s maid. After a while, he professes his love for her and suddenly, both of them find themselves shifting worlds with nothing but what they’re wearing and carrying. On each, they pick themselves up and make plans, only to be thwarted when worlds shift again.

It’s an interesting conceit, but it becomes a little unfocused toward the middle, and the last quarter or fifth of the book gets a little unwound as the book, as a wise man put it in a comment on the review of The Cat Who Walks Through Walls:

…its final act falls apart when the story goes cosmic.

At the end, we have a relationship of Satan and Yahweh along with some other deities as subordinate to a still higher power (which might be subordinate to an even higher power, onto infinity). Of course, spoiler alert: They were testing this fellow, and the end takes place after Armageddon. Also, after Ragnarok. Where the world has not ended for the Norse gods somehow.

You know, trying to weave actual theological entities into fantasy novels is most often a real mess (see also Anthony’s Incarnations of Immortality series, the for-a-while-last, but now penultimate, book dealing with God somehow–I’ve not made it through that particular volume).

Still, Job is a good read in spite of all of that. Heinlein keeps the story moving along rather well, which is a nice contrast to the other science fiction book I’ve read recently (Voyage From Yesteryear). I’m pleased to be getting to the end of the Heinlein later stuff, but I probably won’t reread it unlike some of the rocket jockey stuff.