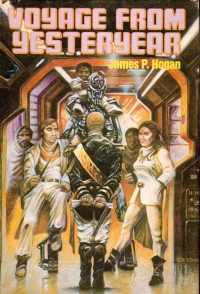 As you might recall, gentle reader, I am a pretty big fan of James P. Hogan (see also the reviews for The Multiplex Man, Paths to Otherware, The Legend That Was Earth, and Martian Knightlife). However, do not let the stretches of time between those book reports diminish my claim. That I apparently haven’t read something by Hogan since 2009 more indicates how time flies when you get older.

The exposition of this book: In the near future (nearer to us than to readers in 1983), international relations are tense (the Soviet Union is still around, and the Chinese/Japanese alliance (?!) is a rising power). An international space probe is launched to a habitable planet around Alpha Centauri. At the last minute, the building blocks of human life are added with the thought that the robots and computers on the probe can build habitation and factories and whatnot that will then build human children to live on the distant planet to ensure humanity survives in case of a cataclysm on Earth. A major war erupts, and an American civilization rebuilds first and sends a generation ship to the new planet, Chiron, to enlist the residents there in the predicted war against the Eastern Asians, who send their own ship four years after the Americans. In the twenty-year journey, the Americans on the Mayflower II have developed their own politics and expectations of their first encounter with the Chironians, and they’re stumped when confronted with the libertarian utopia that has evolved in the forty years when the society with its abundant technologies build itself from scratch.

That’s the setup, and the bulk of the book describes the interaction and adjustment or lack thereof of the individuals and institutions to the Chironian way of life. About halfway through the book, I thought perhaps the book would take a twist akin to a book I’d read some time before — Code of the Lifemaker. Which, as it turns out, is Hogan’s next book. But this book did not take the turn I expected, and it was straight forward and earnest throughout.

Thematically, the book deals with how a society might build structure itself if the base understanding of life and the universe was one of abundance instead of scarcity. How would they organize politically? How would they make their lives meaningful? The book goes into some alternative science premises that Hogan used a lot. As I was reading, I was thinking the Chironian society was like something I’d seen before in The Probability Broach by L. Neil Smith.

Overall, the sweeping themes and meta nature–with political subplots and chapters on quantum physics (with which I’ve tried to grapple with on numerous occasions recently) bogged down my reading of the book. I would have enjoyed it with fewer characters and sidelines, but that’s probably because my attention span has shortened over time.

Also, I think Hogan’s hopeful thesis about how people raised in abundance and without the death-focused strictures that I assume he associated with Christianity and old timey religions would behave. Forty years later, our Western society’s generations raised since this book came out, have proven to be quite petty instead of interested in all being little Howard Roarks and Dagny Taggarts.

Still, an interesting concept and a breath of fresh extraterrestrial air amid the Shakespeare comedies I have been reading this year.