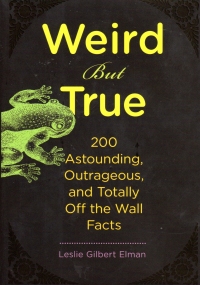 More interesting than the book itself is the way I ended up with it. I took my children to Barnes and Noble last week, as I was looking for a guided journal full of writing prompts to get me writing longer things again, and as a treat, I told them they could each spend $7. Which is enough for a magazine, but probably not enough for a great big Lego book with collectible mini figure or picture encyclopedia a la James Bond. So they looked for a while, which gave me time to scour the store for the thing I sought but whose genre I did not yet glean and then to choose amongst the various instances. And to browse the magazines. And to prod them. The youngest settled on an Archie comic digest, but the older dithered. We looked over the magazines. We looked over the discount books. We went through the kids’ section. Twice. He spotted a Mad magazine special edition, but it was $12, which is more than $7. So I went over to the discount books and picked up this item which was marked $6.98 because it’s kind of like the encyclopedia-type books he’s been filching from my shelves recently and stuck it under my stack to buy and present him as a fait accompli.

Well. I got into line and called them over. It turns out that he and his brother pooled their money to get the Mad magazine special edition (his younger brother rather goes out of the way to do nice things for his older brother). I didn’t have a chance to put it back, so I bought it. And I’ve read it.

It’s a listicle of a book: 200 pages with a fact presented in a sentence or paragraph, sometimes grouped with similar themes, but not always. Many of them were things I already knew, weird but true, and others were kinda yawners. I’m not sure I read anything I retained. But the giant plastic island of garbage I mentioned here appears in this book.

But it filled thirty minutes while the younger practiced basketball at a high school gym way up north, and it gives me a book to count against my anemic 2018 total.

Now it will appear on my read shelves amongst the encyclopedia-like books. From which my oldest will filch it, no doubt.