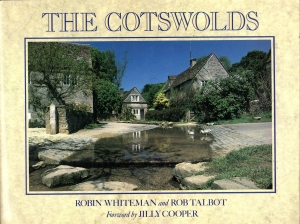 Like the book on Raphael, I hoped to read this book during football games. I picked it up last fall after reading two books with Cotswold/Catswald in the title (Cotswold Mistress and The Catswald Portal). But, as I mentioned in the report on the book on Raphael, I didn’t end up watching a lot of football last autumn, so this book, too, got pushed off but now serves as an interlude between the Shakespeare plays I’m working on.

The book suffers from a similar malady to the Raphael book: A high prose to image ratio, and that the captions beside each image go beyond what you’re looking at in the picture itself. An image of a cottage or a landscape with a distant mill in it will mention the region’s history and role in the wool trade in the Middle Ages (hint: almost whatever the village, it was probably involved).

That said, I really enjoyed the book. The sense of old one gets from European cities definitely trumps the 200 years, maybe, you get out here in the Middle Western and Western parts of the United States. Combining this book with the travelogue of Kim du Toit, who spent part of last year in England, and I might someday be tempted to leave the relative safety of the middle of this country for England. I’d better hurry while there’s still an England, though.

At any rate, a cool book. A step up from the normal tourist takeaway books I read about different regions or the coffeetable photography books about San Francisco or New York.