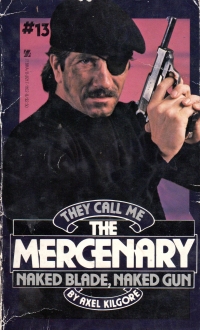 I was surprised to see I owned another in this series, which I now recognize (last year, I read Slave of the Warmonger, the seventh book in the series). I guess I shouldn’t be surprised, since I bought them together along with a pile of Executioner novels in Clever in 2013. This volume is the 13th; the series itself only ran 18 volumes in the early 1980s (according to Fantastic Fiction).

This book is a bit more amateur than Slave of the Warmonger. The dialog is clunky, and there are extraneous bits of activity and interactions that don’t add to the story.

In this book, The Mercenary is reuniting with his gal when he recognizes a killer from Vietnam and pursues him through the airport, but the fellow escapes when the Mercenary is waylaid by airport security. His girlfriend, a reporter, is doing a piece on cults, so The Mercenary tags along and finds a cult that is killing experts on the cult. However, the cult is really a front for a KGB operation that’s kidnapping scientists, and the head man of the Russians is posing as a Christian preaching the evils of cults. Along the way, there are action set pieces and places where this hard-core killing machine acts very, very dumb to further the plot.

So this is probably my last foray into this series. I’m sad to learn (also via Fantastic Fiction) that this is the same author behind The Survivalist series, which I’d hoped to snag a few of somewhere. But you don’t tend to see them at book sales. Which is just as well, since I’m nowhere near finished with that stack of Executioner books that I picked up along with this book back in 2013.