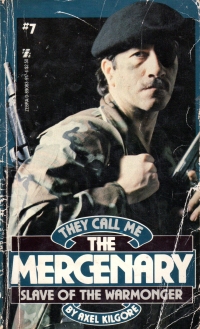 I started this book, and I thought, “This is better than some of the Executioner books, surely.” The writing is a little thicker, a little richer than you get in the least of the Mack Bolan books. However, there was some foreshadowing that all was not right.

The first thing was misspelling a Browning Hi-Power as a Browning High Power. I pointed this out to my beautiful wife early on, and she didn’t ask me how I know so much about guns. Clearly, the answer is reading books like this, except for how much books get wrong about guns.

Then, in action, the lead character, who is not only called the mercenary but is, in fact, a mercenary, runs into a fire fight with an M16 in one hand and an M1911 in the other hand, shooting and hitting bad guys. So richer, thicker prose culminating in 80s movie action scenes and a couple of sex scenes. Did I say “movie”? I mean “direct-to-video.”

Still, it’s quick and readable and still better than the worst of the Executioner books.

The main character is a one-eyed mercenary who favors a black cap. I look at him and can’t help think he might have been the inspiration for G.I. Joe’s Major Bludd. Also, I used to know a guy with an eye patch and favoring slouch caps, and I know the challenges he faced with half of his peripheral vision and all of his depth perception gone. I don’t think I would pattern give a superhuman character a missing eye. Nor would I misspell Hi-Power (although I did once change a pistol from a semi-automatic to a revolver and put eight days in a week, but careful (and by careful, I mean repetitive) copyediting caught it).