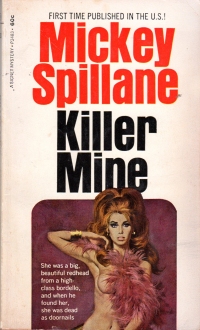 As you know, I just bought this book a couple weeks ago. As it so often happens in the Nogglestead library, I pick up the most recent book I bought to read, and things like The Buddhist Tradition in China languish on my shelves for decades.

I started reading Mike Hammer books in high school, probably spurred by the Stacy Keach television portrayal (and the fact that I read detective novels a lot in high school), but I haven’t seen many Mickey Spillane books at book sales in the past couple of decades, so my reading of them are pretty sparse since the dawn of the new century (see Black Alley, a Mike Hammer novel, in 2003 and Dead Street, a non-Mike Hammer novel completed by Max Allan Collins, that I read last year).

Like More Good Old Stuff, this book is old school hard-boiled stuff. The book is from the middle 1960s, but it reads like 40s fiction.

“Killer Mine” deals with a cop returning to his old, rough neighborhood where some of the local hoods he grew up with are getting bumped off. The brass put him in undercover, placing him as the pretend wooer of a policewoman who still lives in the neighborhood. As he does some legwork and starts to win over the population who distrust police, he closes in on the killer. Who was obvious to a modern, sophisticated reader of detective fiction. As a matter of fact, I wondered how the detective would take 150 pages to discover what I knew from very early. Then, on page 75, he confronts the killer, and I thought, “Whoa! Now there is some twist to account for the other half of the book!” But, no, this single volume is two novellas.

The second, “Man Alone”, I had read before. I don’t remember much except they call the protagonist “The Killer Cop.” A cop beats a framed payoff from an organized crime figure and then the murder of the organized crime figure and sets out to find who framed him. Again, the answer is obvious to modern readers who’ve been dealing with these sorts of twists for decades after this was written.

But we’re not in a Mickey Spillane book for a novel twist at this point. Instead, we’re in it for the gritty, hardboiled writing style, which you get here for sure, but as I have grown older, I find it less compelling than, say, John D. MacDonald or Raymond Chandler–or even Ross MacDonald. It’s certainly above most men’s paperback fiction in consistency and punchiness, but not the top tier. Which, I’m sure, Spillane would have accepted as long as people bought his books.