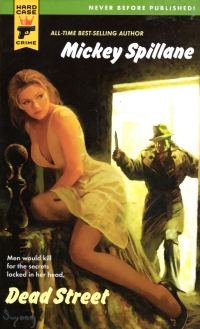 This book is a Spillane novel! From 2007! (Which mimics my reaction to Black Alley, which is a Mike Hammer book I read thirteen years ago, apparently the last Mickey Spillane novel I read).

Except this book is a Spillane book by way of Max Allan Collins. I’ve recently become acquainted with this author from his work on the DC comic book Ms. Tree Quarterly from the early 1990s, and I’d thought about reading a book of his. So it’s kind of kismet that I picked up this book and found it was a book that Mickey Spillane started or mapped out and that Collins finished.

Set in the early part of the 21st century, it deals with a police captain who retired after thirty years on the force. He gets a message that his fiance, believed to have been dead after a botched kidnapping twenty years ago, is alive and is living in a retirement community in Florida populated by former police and firemen from New York. Her savior from twenty years ago, who took her in and hid her, has recently died, so his last wish was that the police captain protect her. The kidnapping incident has left her blind and amnesiac, but when the police captain moves in next door, she starts to recognize him from his voice and his mannerisms, and along with the memories of their love comes the memories of the crime she was bringing to him when she was snatched: The theft of nuclear materials in the middle 1980s.

The books is a pretty good mash-up of modern paperbacks blended with comic book sensibility along with the old-school style of Spillane, but. It was weird to me to read about the cop retiring after 30 years on the force and how different the world was then. The difference between the 1940s and the 1970s would have been vast. Between the 1970s and 2000s a lot less vast (and me calculating 30 years from the present day takes us back to 1987, and the changes there are less vast still. Drop a mere 25 years ago, after the fall of the Soviet Union, and the world hasn’t changed that much, even with the Internet; however, I was an earlyish adopter and was on dial-up computer BBSes thirty years ago). So that motif didn’t ring as true. Also, the recurring motif of the Dead Street–where the captain and other principals of the story lived, but that is getting razed for redevelopment (the Dead Street of the title) motif was drummed a bit much, although it came to be important in the end. And all the interesting individual bits of the story didn’t completely fit together in the end–the plot might have been better treated with a different MacGuffin.

Still, I enjoyed reading it, and I’m interested to pick up a pure Max Allen Collins book somewhere along the line when I find one in the wild. And a pure Mickey Spillane–I can’t let another 13 years go by. The Mike Hammer books (boosted by the Mike Hammer television series) were a staple of my reading diet in the late 1980s. When the world was a vastly different place.