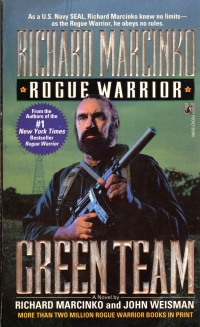 When you open a Rogue Warrior, you should know what you’re getting. A vulgar, fourth-wall-breaking, gung-ho voice that is engaging but on the edge of obnoxious; a backdrop of military political machinations; and set piece gunfights and battles. This book is no different. As the second book in the series, it would be setting the pattern yet, not merely repeating it.

In it, the Green Team, which is the current team of Marcinko’s black ops group, takes down a bad guy in Egypt; when the fellow dies in transport, Green Team become wanted by their unappreciative superior. A group assassinates high ranking military officials in Britain, and Green Team has to find out who did it and exact revenge. They find a Muslim group with inside contacts responsible, and the group’s next plans include simultaneous biological attacks across Europe.

So it’s on par with the other Red Cell/Green Team books I’ve read: It’s a lot of fun, but the political nonsense bogs it down, and it goes on just a couple dozen pages too long, usually about one set piece, where the voice starts annoying. But widely spaced, they’re good fun reads.

This book is most noticable, though, for its prophetic nature. It talks about how easily terrorists move through Europe because there are no internal border checks; it talks about a leader “leading from the front” as a contrast to a president without a military molecule in his body. Additionally, it features said President–Clinton at the time–who is sometimes reluctantly cudgeled into doing the right thing (often by his wife, who twenty years later is running for president).

It’s a pretty timeless book in that way; the president is not named, and although there’s some political stuff and bashing, it’s pretty much the individual-versus-the-system sort of stuff that has been pretty common in thrillers and paperbacks forever, without the political garbage that became commonplace in the 21st century (this book is timeless enough I forget how old it is). Also, the threat of international Islamic terror supported from inside the West is sadly contemporary as well.

A pretty good read. Better than a post-Pendleton Executioner book, for sure.