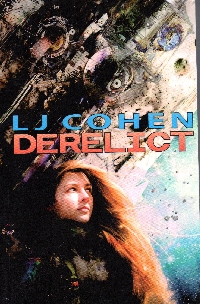 I bought this book on the last day of the local GAME Expo in October. You’ll have to take my word for it, as I did not post a picture of the things I bought on that trip. I bought it from the author, who traipsed all the way from Boston to sit at a table in Springfield, Missouri, to sell her books. I was her last sale of the day, as she was heading out to catch a plane home as we got to the game / science fiction convention on Sunday afternoon.

At any rate, this is like, what, three in a row of self-published books that are pretty good? (Obsidian Son and The Leftovers being the others.) I’m a little afraid of delving into more self-published stuff for fear of ruining the streak.

This young adult book centers on four teens on a remote outpost. Ro, the daughter of the chief engineer of the station, is good with computers and whatnot; Jem and Barre are the children of the doctors of the station, and Jem is a good engineering student while Barre seemingly wastes his talents on music; and Micah, son of a disgraced Senator, who is trying to perfect a strain of a plant-based drug called Bitterweed to break the current cartel’s hold on the supply. Ro hopes to get to the university, and she hopes to revive a derelict crashed space transport as a project to show she’s competent. But the teens find guns in the hold with forged diplomatic seals on them and uncover a plot by the engineer and the senator to traffic the goods. A plot that requires Ro to awaken the ship’s AI and make the ship space-worthy. When she does, the confused space AI takes off from the asteroid in a panic, leaving the four teens scrambling to survive and return home even as they’re hunted by the government and the people who want their wares.

It’s pretty good. It meanders a bit, especially towards the end, but I might just get impatient with books that clock in at almost 400 pages. Also, the derelict of the title is treated as ancient, but I believe the book says it crashed forty years ago. That seems a little recent for how ancient it’s portrayed. Even today, we have almost 100 year old ships sailing the seas and some of our airplanes are forty and fifty years old. Perhaps the author is trying to convey the youngsters’ perspective here.

So I enjoyed the read, and if I catch the author at another fair, convention, or festival, I might pick up some of the later books in the series (I believe she brought four titles to Springfield, but was sold out of one of them). But I don’t think I’ll hop on the Internet and order them to catch up. That is just not my way.