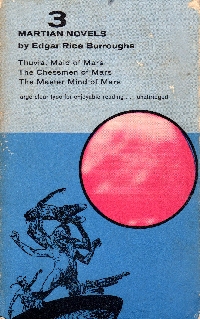 Technically, the copy of this book that I read is the third book in a three-novel omnibus edition called 3 Martian Novels; however, the other two are Thuvia, Maid of Mars and The Chessmen of Mars, both of which I read earlier this year when I read the omnibus John Carter of Mars. I know my book reading accounting system is arbitrary: In my annual tabulation, the five volume omnibus is a single book, but the one novel that I read in this collection is one book instead of a third of a book, which is why my annual reading is currently at 83 instead of 87.33. But I’m accountable to no governing authority on this enumeration, so I’ll do what I want.

Where was I? Oh, yes. In this book, we have another Earthman, a WWI soldier who dies in combat, transported to Mars. He ends up in the employ of a great scientist who has learned how to transplant just about anything–including brains from one body to another. The scientist, a supremely rational being, maps out a plan where he and the Earthman will swap each others’ brains into new bodies every thousand years or so, essentially conferring immortality upon each. The plan goes awry when the Earthman meets the mind of a sweet young Martian woman whose brain has been swapped with into the body of an aged despot, and the Earthman vows to put things aright.

It’s a pretty quick little yarn; John Carter makes the obligatory appearance at the end, but Burroughs has already learned by book 4 of the series that after elevating the main character to the pinnacle of power (John Carter became the jeddak of all jeddaks in the third book) that it would be wise to focus on other, more approachable characters whose struggles would still be acute and adventurous, in the series. So many series keep heaping power, fame, and whatnot on the series characters so that they’ve continually have to find ever more powerful struggles and villains to fight, and the characters end up caricatures or so powerful that the reader cannot identify with the protagonists.

Bully on Burroughs for avoiding this trap.

Also note that my estimation of this book is probably higher because I haven’t read five or six in the series in a row. Mixing the series books in with other books helps keep them fresh, hides some of the formula, and helps each stand alone instead of being instantly comparable to the last one read. So I should take that to heart, although I’ll probably still read omnibus editions as a single book. Except maybe the Detective Book Club books.