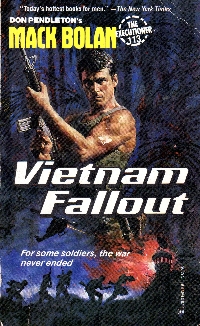 It’s been almost six months since I’ve read a Bolan book (Death Has A Name in July), and this book is 17 books later in the series. Thicker than the old Bolan books (a transition I noted in the previously mentioned review), this one might be a touch better, but it’s still a bit dissatisfying overall.

Within this volume, Bolan is in New York when an ambassador from Vietnam who is making back channel overtures for normalization of relations with the United States is assassinated. Bolan is riding with a cop who happened to be an old war buddy, and they pursue the assassins. The friend is cut down, which sends Bolan on a search for vengeance that leads him to Vietnam. Although this book kinda treats this like it’s a fresh return for Bolan, we who read the books instead of write them for hire recognize that he has already been back in a book entitled Return to Vietnam.

Once in Vietnam, Bolan engages in a rehash of Heart of Darkness–or maybe Apocalypse Now, the original rehash of Heart of Darkness set in Vietnam, albeit during the actual war. As he follows that plot line, he engages in some questionable decisions that seem to go against the marrow of the character for future plot twists. And then the book reaches its shoot-out climax, and Bolan wins.

The first part of the book, in New York, has a different feel from the second half. One wonders if two incomplete manuscripts were grafted together to make one longer book. Or, one fears, maybe the remainder of these books will be like this. Which would be awful, since one has a lot of these later books from scattered places in the 400 or 500 book canon.