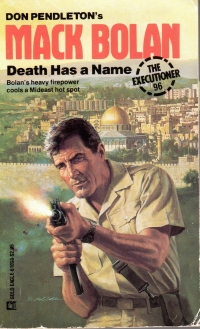 As I mentioned in my most recent review of an Executioner book (Shock Waves, #81 in the series), the numeric gaps between the series books in my collection grows. This one, #96, skips ahead fifteen from the last one I read (although only twelve from Missouri Deathwatch which I read in 2009, right after I moved to Nogglestead).

The changes between the earlier Bolan books and this one are stark: At almost 250 pages, it’s a third again as long as the earlier work, and the writing style is not as terse. It’s as though the writing has shifted from copying 1960s paperbacks (themselves owing a great debt to the proper pulp stuff of the 1930s and 1940s) and more copying the then-current thrillers of the day. So the writing is a little more flowery and less punchy.

In this book, Bolan is about to kill a Mafia figure at his daughter’s wedding, but holds up because he’s in a church. But an Israeli agent jumps up and starts spraying with an Uzi, and Bolan tries to help her escape only to discover that she’s part of a shadowy Israeli group that is working to break up a Mafia-Palestinian arms connection that will arm the Palestinians with enough weaponry to seriously challenge Israel’s statehood. So Bolan travels to Israel with his brother Johnny and works with the team of Israeli commandoes.

To be honest, I was less than impressed with this outing. In addition to being 50% longer than previous works, it features such bits as describing the baddest of the Palestinians as rich from oil money, poor squad-level tactics, and some gun buffoonery. It also features head scratchers such as the leader of the Israeli commandoes shooting a bad guy as Bolan says “We need him for intelligence” followed not too much later by a reversal where Bolan is going to shoot a bad guy and the commando says “We need him for intelligence,” and this complete reversal is for nothing more than giving the bad guy time to detonate a suicide backpack.

Ay, I am likely to less enjoy these books as they get longer, as the authors will likely just add more of the bad padding parts to the books to make the new page count.