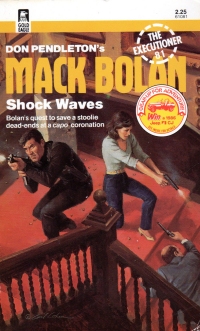 Do not confuse this book with the John Sandford novel Shock Wave. I didn’t until I was looking at the names of books I’d already read and thought perhaps I’d read this novel before and mistyped it.

At any rate, this book is a bit of a skip from the earlier ones I’ve read: The last, The Bone Yard was #75, and this is #81. As I get later into the series, the numbers skip by higher increments. I wonder if the books lost their popularity after the middle 1980s enough that there aren’t a lot out in book sale circulation (or if the covers changed colors enough so that I don’t recognize them). So I’m likely to miss some series business, such as changing the focus from the Mafia (again) to aliens or something.

Within it, Bolan travels to New York (Long Island) to rescue an informant who has been captured from the witness protection program by the mob. He finds a local boss has called together a klatsch of capos to crown himself the boss of all bosses. One of the Ranger Girls has accompanied a West Coast capo to the meeting, and her attempt to communicate intel blows her cover. So once Bolan starts shooting, he has to watch out for a couple of friendlies.

The book is a bit talky: Everyone gets a chapter to think about Bolan and what he’s doing. Although there are interesting elements to the plot–one of the West Coast capos calls in reinforcements who arrive just as Bolan sets it off–they’re not handled very deftly. And the book climaxes quickly with the big shoot-up set piece.

So it’s a basic Bolan book: A hard site, a soft penetration, a hard invasion, finis. With a lot of extra talking instead of suspense or tension.

Perhaps it’s best that I not find too many of the later books in the series (by later,, I mean “the back three quarters”) as they’re keeping me from reading important books that make me feel smaht. On the other hand, they do break up the smahtness. So I’ll continue reading a dozen or so of these a year. Almost like I had a subscription!

The end material of this 1985 book is also interesting. In addition to the subscription offers (with free bumper sticker), Gold Eagle has a tease for its Automag magazine about men’s adventure fiction (which must have flopped, as I can’t find anything about it on the Internet, although the people who named the magazine certainly picked a name that would yield search engine results for actual semi-automatic magazines and gold coins in the 21st century–but then again, SEO in 1985 was very primitive indeed). There’s also a contest for a Jeep CJ and a Gun Data Sheet for some obscure rifle.

Also, the book uses the phrase the war on terror to refer to Bolan’s earlier exploits in attacking terrorist groups. Which made it seem a little more contemporary than the book is, but when I was reading those books (in the middle 40s to, what, late 60s? #70?), the same terrorist organizations and countries remain hotbeds of terrorist activity today. So the books remain too timely in that regard.

These books are not only quick and sometimes interesting reads, but they’re wonderful bits of 80s nostalgia.