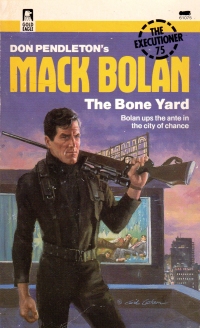 This book is the second in a row from the Executioner series that has an intricate plot, but this one was a bit more intricate than the writer could handle.

In it, Bolan is in Las Vegas. As he’s making a probe of a hard site, a bunch of ninja come charging out of the house carrying a woman over their shoulder. It’s ninja from the Yakuza who have come to hit the a Las Vegas mob boss, and they’ve carried away a woman reporter he was interrogating. Before they can interrogate her themselves, Bolan steps in and rescues her. She’s writing a series on the mob for the local paper, and somebody wanted to silence her. Turns out that she’s the granddaughter of the old Jewish mob boss who was neutered by the mafia but who was kept on as a hotel manager. He goes way back with the paper’s publisher, and the grandfather has plans of his own to cut down the mafia with his own imported mercenaries. And there’s the Yakuza moving in.

So there’s a pretty intricate plot going on with several moving parts, people with their own agendas, and whatnot. The author cuts between some of the players to get their thoughts on their next move, so it’s a bit more complicated than the books told solely from Mack Bolan’s point of view.

Unfortunately, the complicated build up is solved, ultimately, in a couple of basic Gold Eagle paperback set piece shoot-em-ups that really diminish what was going on and end it a bit abruptly.

The plot could have been so much more, but in the end (the abruptish end), it’s 180 pages of what it is, not what it could be.