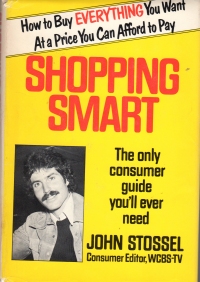 You know I’ve read some of Stossel’s more libertarian current events (then current) books like Give Me A Break and Myths, Lies, and Downright Stupidity. This book is not in that vein: Before he was a correspondent on 20/20, he was a local consumer reporter in New York City, and this book stems from those reports.

Its subtitle is “The only consumer guide you’ll ever need.” Spoiler alert: It is not.

I used to say that the Internet really hasn’t changed things all that much, but I stand corrected. I came of age as the Internet did, so all the adult things I’ve had to do, I’ve had to do in the Internet age (although I have typed college papers on a typewriter and used a card-based library catalog). Chapters on buying a house and buying a car illustrate how much these things have changed. I generally know what I want before I go to the dealer or, although I tend to retain a realtor, I do a lot of looking myself through the MLS on Realtor.com to get a sense of prices and whatnot. So just from the research elements alone, consumers are already ahead of where they were 40 years ago.

So the book is more relevant as a historical document than anything else: You can look at it to marvel at the $5,000 cars and the 10-12% interest rates. The charts that have nine or ten major national carriers and their customer satisfaction rates (spoiler alert: The ones with the lowest survive the best). The appreciation of the new stuff that is old stuff by now (Tylenol, before the taining scare, as better than aspirin).

You probably have to have been there, alive and partially cognizant, in 1980 to really appreciate how much buying and selling has changed in the interim. Otherwise this book is nothing but one of those 1800s medical texts that people buy to decorate their homes with old books. With a disco-era pictures of John Stossel as the main decorating point.