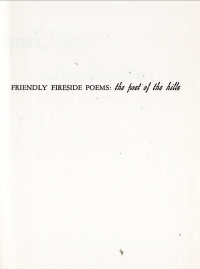 This book is a nice collection of poems from the middle part of the last century. The author has a pretty good sense of rhythm, the poems have end rhymes, and they’re nice short bits of Americana with an especial Christian sensibility. They cover things like the seasons, special events like Inauguration Day (Eisenhower, probably), and holidays. They’re about being neighborly and looking to God. The kind of thing that got published in newspapers in a bygone era, but never made it to the slicks or the anthologies.

They’re better than some of the chapbooks I read, but unfortunately, they suffer in comparison to the better of Edgar Allan Poe’s work which I read concurrently. The Poe poems are fun to say aloud, whereas these are just words.

So it’s okay if you’re going deep into the poet bench, but there’s a lot of better poetry out there. On the other hand, the poems are nice and short, and I’m learning just how much aversion I have to long poems.