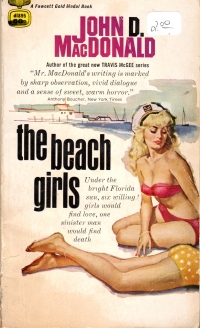 This book is definitely a MacDonald: It features a bunch of people in a marina on the east coast of Florida in the 1950s. You’ve got a businessman from up north coming down, looking for the man who seduced his wife and caused her suicide. You’ve got a number of individual characters living on the boats and/or chartering fish boats. You’ve got big businessmen putting the squeeze on the small marina owner, trying to get her property for development. And you’ve got a climactic party on the dock.

That said, it’s not a particular stand out volume in his work. It has his trademark outstanding writing and whatnot, but the elements of the plot and the characters fall into what would later become MacDonald stock.

One thing I get a charge out of, and a way I romanticise these older works, is how easily they drop in classical literature allusions and whatnot. For example, a woman performs the talent portion of many beauty contests she’s won, and she does it by reciting:

Ef yew keep yo haid when all about yew air a-losin’ they-yurs an a-blaimin’ it on yew?

Mostly because I just read The Grapes of Wrath (donchewno?), and it’s all a-rife with the vernacular (albeit a different accented vernacular). Also, I’ve read my Kipling, and that’s something MacDonald and I can share. I’ve gone on about this at length, I know, but it makes me thing the middle twentieth century was a time when an author assumed the reader had read Great Books with him. But I digress.

So I got that out of it. The older I get, the more I get out of reading these books and understanding more allusions (see also A Tan and Sandy Silence and Two Other Great Mysteries). Of course, I said the same thing to Robert B. Parker almost thirty years ago.