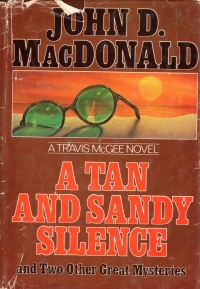 This book collects three Travis McGee novels from the late 1960s into a single hardback edition. The originals, it should be noted, were in paperback. The three books are A Tan and Sandy Silence, The Long Lavender Look, and Bright Orange for the Shround.

In A Tan and Sandy Silence, McGee investigates the disappearance of an former lover after her husband comes looking for her upon The Busted Flush and tries to kill McGee. Travis discovers a disturbing financial plot, philandering, and a sociopathic French Canadian accountant involved in a land development scheme with the husband. The book also has a subplot about McGee contemplating retirement and marrying a wealthy widow. In The Long Lavender Look, McGee and Meyer find themselves framed for murder in a remote Florida county where they’re mistaken for murderers of a local hoodlum who just got released from prison after his last score. Locals, including some of the police, are on the hunt for the proceeds of the heist. In Bright Orange for the Shroud, a formerly well-to-do acquaintaince finds Travis and eventually tells of how his new wife involved him in a land development swindle that picked him clean. McGee tries to recover some of the money from the swindlers and finds a backwoods badman of which nightmares are made.

It’s been a long time since I’ve read a McGee book (actually, it’s only been four years since I read The Turquoise Lament). It seems like longer, though, because I tore through these in high school and have not made a concerted effort to re-read them since (unlike the Spenser series, which I last read through from start to finish about fifteen years ago–there were a lot fewer to get through fifteen years ago). So after a little taste of MacDonald with End of the Tiger and Other Stories, I picked up this collection I had standing around. And I’ve rediscovered how much I like this series.

There’s action and interesting plots that we discover along with McGee (remember when this was a thing–that the reader discovered the plot along with the protagonist instead of having the bad guys have their own chapters in italics so everything was clearer at the outset? Modern readers must lack patience, or authors fear the old people who still read books might die off before seeing their genius machinations at the end of the 400-page thriller). The books are at times a bit wordy, a bit musing, but the passages include digressions such as this from A Tan and Sandy Silence:

I went below, turned on a few lights, built a drink, ran a thumb down the stack of tapes, picked Eydie, and chunked her into the tape player and fixed volume.

Eydie has comforted me many times in periods of stress. She has the effortlessness of total professionalism. She is just so damned good that people have not been able to believe she is as good as she is. She’s been handed a lot of dull material, some of it so bad that even her best hasn’t been able to bring it to life. She’s been mishandled, booked into the right places at the wrong time, the wrong places at the right time. But she can do every style and do it a little better than the people who can’t do any other. Maybe a generation from now those old discs and tapes of Eydie will be the collectors’ joy, because she does it all true, does it all with pride, does it all with heart.

So I settled back and listened to her open her throat and let go, backed by Trio Los Panchos, Mexican love songs in flawless Mexican Spanish.

Twenty five years later, and I know what he’s talking about.

At any rate, the asides, philosophical musings, and bits of self doubt have more depth in them than the similar things you find in the Don Pendleton Executioner novels; given how Pendleton’s paperback originals came after MacDonald’s, I can’t help wonder if the former didn’t directly influence the latter.

I didn’t remember much from these books–the subplot from A Tan and Sandy Silence being the thing I remembered the most–I should really look back to this series and reread it for pleasure. Although I’ve got few of them on my to-read shelves, and I feel obligated for the most part to hit those before returning to books that I actually enjoy. So maybe I’ll get lucky and find some other omnibus editions in the book sales of Springfield sometime soon. Of course, I have plenty of other MacDonald paperbacks to read, and my recent experience has reiterated that they’re worth my while.

1 thought on “Book Report: A Tan and Sandy Silence and Two Other Great Mysteries by John D. MacDonald (1971?)”