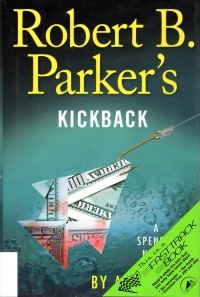 My beautiful wife saw this book at the library and brought it home for me to read in a hurry, since it’s a new book and is only available for a week checkout. So I did.

Welp, the book is an Ace Atkins Spenser book, and he’s moving more into his style than merely imitating Parker’s here. In the book, Spenser works to investigate the relationship between a judge in a small Massachusetts town who sentences juveniles to a for-profit rehabilitaton facility and the for-profit company running it. Of course, the new mob is involved somehow, although I’m still unclear as to how.

My enjoyment of the book is probably diminished by how soon after the Travis McGee books it came.

Atkins’ style for these books, as I’ve mentioned, seems informed by television; the scenes are television-like scenes of scenery and dialog, and the ending of the book wraps the plot up with an explanatory resolution and then some things that might be woven into a future episode. Or not.

The writing also suffers from a couple other flaws:

Is it a good book? Is it a bad book? It’s a modern crime fiction book, and it’s probably not a bad example of the genre. But it’s nothing compared to the paperback originals from fifty years ago.