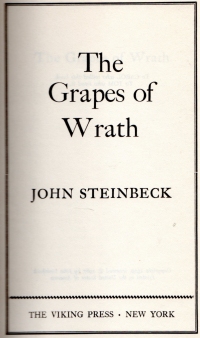 I told my beautiful wife that I had previously read this book in high school because I am a compulsive liar. I actually read it, now that I think about it, probably in my modern American literature class at the university instead. I remembered the basics of the plot, but that’s about it. Otherwise, I surely would not have read it again.

Make no mistake: I like Steinbeck well enough (see my reports for Travels with Charley, The Long Valley, Tortilla Flat, and Of Mice and Men). But this book, Steinbeck’s magnus opus, is nothing but Depression era full-on socialist/communist agitprop and not a very good story.

As you might know, the plot revolves around the Joad family. Small farmers in Oklahoma, a number of bad years and overdue bank loans force the family off of their land when their home is foreclosed upon (and “accidentally” damaged by the tractor driven by an operative of the new land owner, who turns it into a portion of a larger farm. They buy an old, beaten down truck and begin a journey to California based on a handbill that they have seen promising work picking crops there. They go on the road, have some adventures incidents, and eventually reach California to find that the handbills have drawn hundreds of thousands of people in similar circumstances, and there’s not enough work to go around. So the Joads live in a Hooverville, get driven out, live in a government commune for a while, but leave to look for work up north. They find some work picking peaches, but Tom kills another man and has to go into hiding, so they go to a cotton picking operation some miles away while Tom hangs out, and when his younger sister blabs, Tom goes on the lam. Then a flood forces the remaining Joads out, and life goes on. Well, some other stuff happens, but that’s the nub of it.

The narrative story of the Joads is broken up by short chapters decrying some bit of capitalism or another. We get bits about the banks, bits about car salesmen, and how capitalism is destroying the country and keeping the little man down. The characters themselves are not very deep; instead, they’re ciphers of good, simple farmers buffetted by the bad winds of change. The main hero, for Pete’s sake, is a hothead who is just getting out of jail for second degree murder, and he commits a second one by the book’s end. The younger brother is ruled by his hormones. The father and uncle are unimaginative. The mother, who holds it all together by being strong, is simple. I get the sense that Steinbeck doesn’t like his characters so much as pity them (an insight I can apply to his other works, too), and that makes for characters readers cannot relate to.

The Joads are isolated, too; although they’re said to be Godly folks (especially the grandmother, who spurts out “Praise Gawd” like she’s got a Christian flavor of Tourette’s Syndrome), there’s no church, larger family, or support system when they fall on hard times. It’s a lot like when Barbara Eihenreich pretended to be poor for a book (Nickeled and Dimed: On Not Getting By In America). The poor cannot get along without government help because extended family, charity, and churches don’t exist.

So I didn’t like the book, and I wonder if it’s on so many syllabi simply because of its anti-capitalist content. It’s not even Steinbeck’s best (The Winter of Our Discontent is far better).

Reading this compassionate reflection of migrant peoples deserving their small plot of land for substinence farming, I’ve got to wonder what Steinbeck would make of current migrations, such as Mexican residents coming through those same areas of California today (and with the same economic goal/impact and resistance from existing residents of the area) and Middle Eastern refugees coming to Europe. Would Steinbeck be as sympathetic to these migrations and so disunderstanding of existing residents who might resist the new people arriving? Steinbeck shows no sympathy to Californians already in California when the Joads and other displaced people arrive.

The book also romanticises a family’s tie to a small patch of land, like five acres with a small cash crop, some dooryard crops for eating, a couple of chickens, and a couple of pigs. If only everyone could have that instead of large tracts owned by large-scale food producers using tractors! However, the economies of scale in large farms and livestock operations provide the food needed by large populations, especially urban populations, of the twentieth and twenty-first centuries. A lot of people don’t get that, and insist that hobby farms can provide everyone with what they need. This book certainly wants us to think that, but sustenance farming was mostly sustenance farming, and a couple of bad years could wipe a family out. As they did in the beginning of the book, but Steinbeck does not see a lesson in that.

That’s not to say I didn’t take something from the book: Since I’ve read it, my diction has declined a bit as I’ve started imitating Steinbeck’s representation of sloppy Okie speech, and I’ve started eating beans as whole meals. It did help me along with one of my current goals for 2017, though: I’m hoping to finish reading all the comic books I own, and as I crept along through this book at two chapters a night, I filled the rest of the reading time with comic books. I’m almost ready to start the box of comics I bought at a garage sale nine years ago. So I’m on track for that goal.

At any rate, I’m happy to be done with this book.