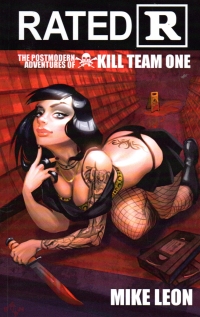 Lily loves movies–especially the bloody ones. They distract her from her broken life, even if it’s only for a few hours at a time. But something unbelievable is about to happen in the backwards little video store where she works. Someone Lily knows is not who they say they are. And when she finds out their dark secret, she will be drawn into a world of violence and destruction as fantastic as any body-count blockbuster. She will be hunted by mercenaries, a ninja master, an invincible cannibal butcher and a psychopathic super soldier more bloodthirsty than death itself. If she’s lucky, she might still be breathing when the credits roll…

It’s a self-published bit by an author with a large number of books available, so I expected something akin to a men’s adventure paperback like the Executioner series or something you’d find on Glorious Trash but with a more modern bent.

The book details how Lily becomes involved with a stone killer hiding out from his past. But he’s just like seventeen or eighteen and is a super soldier. When he defends the video store where they work together from a robber with extreme prejudice, people from his past, including some other super elite soldier types (with gimmicks) come looking for him. And his brother, perhaps even a better killer, breaks out of his special prison and goes looking for a special MacGuffin which Lily and Sid (the super soldier) must find first.

So the book has its postmodern bent, where Lily calls the MacGuffin the MacGuffin. It doesn’t take itself too seriously, and it has its tongue in cheek. But, boy Howdy, is it lurid. Lily is promiscuous, and she has numerous encounters with Sid and others. They’re not Gunsmith-level depictions of human intimacy, but they’re not couched in the-train-whistle-blows-and-the-train-goes-into-the-tunnel-symbolism, either. The fighting sequences take the worst splatter-instincts of the Gold Eagle or Death Merchant metal-and-anatomy prose Pollock portraiture and amp it up. Which might be part of the post-modern winking of the book. Which is not to say it’s poorly written–the story and text pulled me along in spite of the purple. But it’s probably not for everyone, and I’m not entirely sure it’s for me. Which might be unfortunate, since I bought a second book by the author (not in this series). Both at full price.

I enjoyed it better than The Grapes of Wrath. Also, I phrased it that way to better serve as a blurb should the author search for himself and find this review. “Better than The Grapes of Wrath”–Brian J. Noggle, author of John Donnelly’s Gold. Because I’m working on marketing myself and my Internet brand even as I jot down thoughts on things I read.

What was my point? Oh, yeah. Recommended? Well, perhaps, if you want to experience what it is like in the 21st century to read something comparably trashy to men’s adventure fiction was in the 1960s.