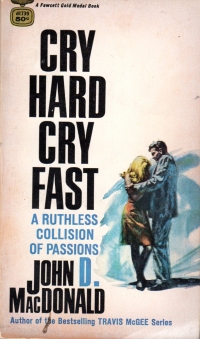 I read Slam the Big Door in August, and it features a car crash (‘slam the big door’ refers to the sound of a car crash in the night on the backroads of Florida), and this book centers on a car crash. I wondered if this was from MacDonald’s CHiPs era.

But the books were published five years apart with many intervening novels. Perhaps he wrote them close together, or perhaps he rotated back into subject matter when it seemed fresh after the passage of time.

Unlike Slam the Big Door, this book centers on a big car wreck: it focuses on the individual stories of the people and families who are going to be involved in the car accident and the immediate aftermath for the survivors. We have a recemt widower on a trip to recover from his grief (see also Slam the Big Door. We have a nuclear family with a domineering father and an attractive teenaged daughter; we have a couple trying to rekindle their marriage after the husband becomes cold and distant; we have an ace truck driver considering moving into management; and of course, we have a couple of bad fellows on the run from an armed robbery and the funtime girl they picked up at a roadside bar. It’s vintage MacDonald, slamming all these people together (literally) and seeing what erupts.

The first part of the book, before the accident, is better than the last bit after the accident, but it’s still a pretty good read.

As I mentioned, I have a number of MacDonald books on my shelves, and I’ve been reluctant to read them because once they’re gone, they’re gone. However, given my ability to re-read the Travis McGee books from time to time, perhaps I should seek more of them out since I enjoy them and I can re-read them when I’ve finished all of them. And, to be honest, finishing all the John D. MacDonald books is a better use of my time than reading all the Executioner books (that is, the Mack Bolan books, not The Executioner, which is a John D. MacDonald book).