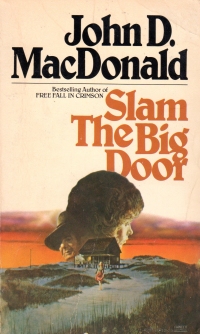 It’s funny: I like John D. MacDonald a whole lot, and although I have a number of his paperbacks on the to-read shelves, I don’t delve into them too often–it’s been a year since I read End of the Tiger (on a different vacation, no less) and then A Tan and Sandy Silence and Two Other Great Mysteries. In preparation for my recent trip to Florida, I started this book and finished it on the plane en route to the keys of southwest Florida. Not the Florida Keys, mind you, but definitely some other cays ‘n’ bays.

At any rate, in this book, an ex-newspaperman whose wife just died from quick moving cancer visits an old Army war friend in Florida. The friend used to live in the city and was a big honcho for an advertising agency (akin to the fellow in “Hangover” in End of the Tiger, come to think of it), but he had a self-destructive urge to dissipation, which caused him to turn to drink and to a loose woman, costing his job and his marriage. After a bit of time finding himself, the friend became a builder in Florida and married into a piece of money which allowed him to try a larger development. However, a group of native businessmen want to usurp the development en media res, so they start applying different sorts of pressure to create money problems for the wartime friend. The appearance of the loose woman from New York and the trouble with the development lead the man back into a dissipation spiral.

Which the antagonist tries to stem with mixed results.

There’s not a lot of crime in the book; it’s more of a character study and a business/land development story, but it’s still told with MacDonald’s characteristic ease and comfort. The characters are believable, and the story has depth as the antagonist muses on growing old (at 40 something).

I don’t know when I’ll pick up another MacDonald book. They’re a fixed quantity, and when I’ve read them all, I shall be sad. Except there are so many, I can re-read them with some freshness. But my to-read stack does not allow much re-reading unless it’s accidental.

Toward the end of the book, someone recommends that the protagonist and a young lady visit Marco Island, which has a nice beach. I took that recommendation! What’s interesting about this allusion in this book is that the book was published in 1960, which is a couple years before the developers made Marco Island into what it is today (as we shall see later in the week or as you’ve already seen if you’re reading this blog backwards chronologically from sometime a week or so hence). So it’s written before the developers that MacDonald often lambasts had their turn at a destination he mentions.

At any rate, I recommend the book if you are old enough to understand books without cell phones and computers in them.