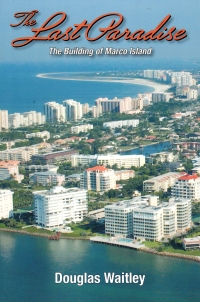 This book reads as a corporate history book of Deltona Corporation, a land development company run by three brothers named Mackle who cut their teeth with inland developments and then turned their attention to Marco Island, an island on the southwest coast of Florida. In 1962 (twelve years after John D. MacDonald recommended the beach there), they built a hotel and then some housing for middle income Americans with the trick that each house on the island would have its own dock. They made a good start of it, dredging canals and swamp to create a series of waterways that meant many of the houses had a street in the front and a dock in the back.

Unfortunately, the success was not to last, and the company ran into trouble. Dredging permits were only good for three years, so the company split the island into five parts and planned to get a permit for the section they were building. They got a couple permits renewed, but by time the early 1970s rolled around, the environmental movement ramped up and opposed any further development. Although Deltona Corporation had been environmentally conscious in its development, environmental groups wanted to make an example: that even an environmentally conscious and responsible corporation would be brought to heel. And so it was.

Deltona was in trouble because it had been selling undeveloped lots to fund current development, and when it could not develop those lots as planned, it had to recompense the owners. Which drove the business to sell off a bunch of profitable things to square up. One of the Mackle brothers interviewed for the book pointed out that Deltona could have declared bankruptcy, it did not because that was not the way things were done.

The book differs greatly from normal Florida reading where the land developers are greedy bad guys. This book presents them in a favorable light, if perhaps a bit creative financially. And audacious: The design for Marco Island, only partially completed, was quite a hit with the land-buying public in the 1970s, and the homes on the island still go for a pretty penny.

So I enjoyed the book a bunch and was able to relate to my family elements of the island’s history while we were staying there. So it was a good use of part of my vacation.