For my second book of my vacation (the first being the last chapter or two of Slam the Big Door), I started on this book. It’s one of Robert Heinlein’s youth rocket jockey books from 1953, so it’s not as, erm, liberated as his later adult fiction.

In it, young Max Jones is a farmer in the Ozarks. He’s living at sustenance level, plowing with borrowed livestock, and providing for his stepmother and acting as the man of the house after his father passed away. His stepmother marries a man from town who then tells Max that he’s selling everything, including the farm and Max’s uncle’s books, and he threatens Max with physical punishment for disrespect. So Max lights out for Earthport. He runs across a seeming hobo who steals Max’s ID card and books and presents himself at the Astrogator’s Guild to claim a place as a trainee; however, neither the hobo nor Max can claim that position. So when they meet up, the hobo helps Max forge papers and take off in a space craft on a year-long interstellar flight.

A series of events occur that lead Max to move up from the livestock handler to, ultimately, the Captain of the ship (briefly).

It’s a quick read (even though it’s 252 paperback pages. It’s an interesting take on interstellar travel and the world where it is possible from the perspective of 1950 something. Max is an Ozarks farmer using livestock in this future, but from what I know of rural Missouri in the 1940s (see Growing Up In The Bend, for example), 1953 was not that far past draft animals and electricity in rural Missouri. The use of computers tracks perhaps with World War II naval operations but not so much with 21st century usages. So you have to have more suspension of disbelief than normal.

But if you’re looking for rocket jockey science fiction from time to time (and you should), you could certainly do worse than Heinlein.

Also, note on the cover, the dreaded Spider Puppy: 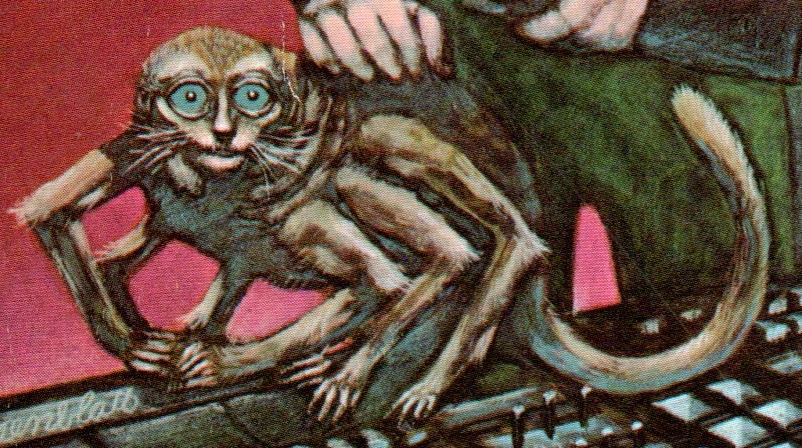 My wife and I have taken to calling it the Spider Monkey Puppy in the intonation of that obnoxious but forgotten Super Bowl commercial.