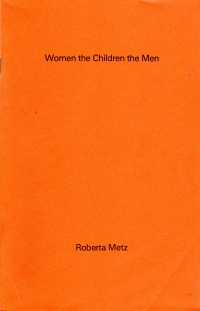 This book is another poetry chapbook I picked up somewhere. It’s from 1979, so it’s old school.

The title refers to sections of the book, one on women, one on children, and one on men. Each contains poems focused, kind of, on the experiences of each, but all of them are from an older, wiser woman’s perspective, whether it’s about being a widow, about having a sexual relationship as an older woman, having children, having men, and so on. Honestly, the men come off a little bit at a loss here, although it’s not entirely male-bashing.

The poet is a more professional poet than, say, Charlotte Osborn. You can immediately tell because the language is unabashedly contemporary (to 1979) and the lines lack end rhymes. Also, the metaphor and rhythm have a certain facility with them.

So a pretty good collection, a step up from the flowers-and-life poems of the housewife set, with a few lingering ideas and images.