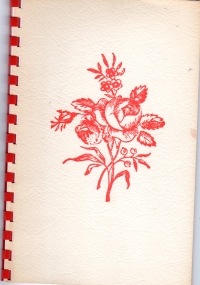 This book would seem to date from the 1960s, given that its proceeds would be used for the restoration of the Old Bonhomme Presbyterian Church in Chesterfield, Missouri, and I did some rudimentary research to see when that happened. The book is not available on Amazon or eBay and does not appear anywhere on the Internet, seemingly. So maybe I’m just making it up.

At any rate, it’s a short (12 poems in all), comb-bound collection of poems that are not particularly Christian nor gospel-based. Instead, they’re musings on the common poetical themes of love, the passage of time, and enjoying the fleeting present. The language is at times a bit self-consciously imitative of middle English, but not exclusively so. And the poems are not bad, but they don’t stand out.

On the other hand, it is another example of early-to-mid-twentieth-century women, generally middle aged, putting their thoughts to verse and then publishing them, which means we can still see them fifty years later. It might not be poetry to last the centuries, but it’s a literary endeavor that surpasses what many, if not most, of their contemporaries were doing and many, if not most, of their twenty-first century contemporaries are doing, me included.

So it’s not a bad way to spend a couple of minutes in between sonnets you’re writing or snarky tweets.

I wonder where I picked this up. It’s the kind of thing I get bundled at five-for-a-dollar at the Friends of the Springfield-Greene County Library book sale, but its origins are in the St. Louis area. Did someone bring it down here and donate it, or did I pick it up in the St. Louis area many years ago? Fortunately, although I wonder about it. I’ll be done wondering about it when I finish this post, so I can focus on proper insoluble problems, such as “Can I convince someone of something political on Facebook?” (Answer: No.)

1 thought on “Book Report: Let Us Go Quietly Together For A Little Way by Charlotte Osborne (?)”