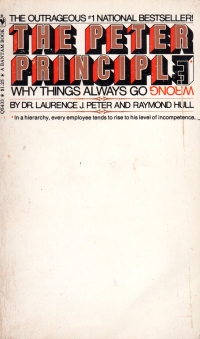 Most of us have heard of the Peter Princple: That a person tends to get promoted to his or her level of incompetence. That is, in any heirarchy, any person who does his job well enough to get a promotion will eventually get promoted to a position above the person’s competency, where he or she will not be able to do the job. This book is the source of that idea and not only includes it, but also includes other related observations about organizations.

For example, it explains how people who get put into those positions cope with their placement in jobs they cannot do: often, they substitute some task within the function to focus on. More frequently, though, their efforts go not toward doing the work/serving the customer/making money, but more toward supporting the heirarchy.

When a heirarchy becomes too laden with people who cannot do their jobs effectively, the company folds or the government falls. You can forestall this with by shuffling incompetent people or creating new positions to fill with people who have not yet reached the level of their competency. You cannot fix the problem with computers, as computers merely do what they’re told, and you’ll eventually have incompetent people in charge of them.

You can avoid this yourself by avoiding a promotion when you’re happy with your job, but to avoid stigmatism for not being ambitious, it’s best to fake a certain amount of incompetence to avoid being offered a promotion. Even if you reach the peak of your profession, you might be tempted to move to another heirarchy where you might find your level of incompetence eventually.

How does this book compare to C. Northcote Parkinson’s Parkinson’s Law? The book actually addresses Parkinson and says he does not go far enough because work can not only expand to fit the time allotted to it, but beyond if the heirarchy is too stuffed with incompetent individuals to get the work done.

The book ends with a chapter on the Peter Principle on the scale of the human race and fits in with the Malthusian zeitgeist of the time, unfortunately, but it doesn’t detract too much from the preceding chapters.

It’s a humorous, tongue in cheek look at heirarchies and has some truths in it. It is so tongue in cheek that I wondered if it was all a put-on, but Dr. Peter actually exists and did study heirarchies with numerous other publications, so I guess he’s for realz. A good, fairly quick read and quite a best seller in its day: this book, one year after publication, is the eight mass market paperback printing after 13 other printings, and the book is still in print today. So somebody likes it.