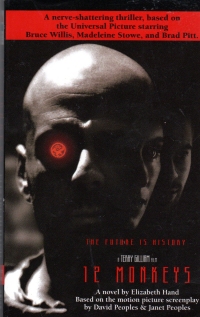 Keeping with the “Is the person in the mental institution crazy or really a science fiction protagonist” subgenre reading I started with this book.

12 Monkeys is a novelization based on the screenplay (from the Bruce Williams/Brad Pitt film). Now, novelizations from screenplays can go one of two ways. You can get some additional depth that you don’t find in the film, or you can basically get prose from the screenplay. Unfortunately, this is the latter.

For those of you who haven’t seen the film (I had not), the main character is a convict from the future “volunteers” to collect samples from the contaminated surface and then to go back in time to find the source of a deadly virus that wipes out half of humanity and compels the remainder to hide underground in uncontaminated facilities. In the past, Cole arrives six years too early and gets taken to a mental institution where he meets a psychiatrist and the son of a famous virologist. He looks to find the source of the infection, gets yanked back into the future and reinserted in the past a couple of times, and begins to question whether he actually is crazy.

At any rate, it’s all right, but I didn’t like the ending much: I’m not sure if it was intended to be throught-provoking or was just sloppy storytelling (on the part of the screenwriter(s) more than the novelist). Actions don’t make sense, and the thoughts that are provoked try to explain the nature of the ending result in “That doesn’t make sense.” To be honest, I hoped for an ending not unlike the ending to the Kris Kristofferson film Millennium (book review here). But no.

A better novel would have explored more of the interior and back story of Cole, the convict, explaining where he came from and what he was convicted of. That’s not germane to the plot of the story itself. Also, it seems that mankind develops time travel really fast while recovering from a serious extinction-level event. So all the questions the book raises are with the story and plot itself, not with any philosophical things. Again, this is not the book author’s fault, but I wonder if it could have been handled better in the depths of a novel.