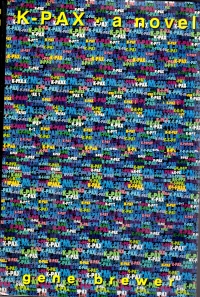 The cover purportedly is a stereogram, which was a fad of crazy prints you were supposed to stare at to see a three-dimensional image. They were the big thing in the early 1990s, with complete shops in the mall selling nothing but Magic Eye products. I was trying to explain this to my beautiful wife, but she’d never heard of such a thing. Coupled with the fact that the spellchecker doesn’t know the word, I’m beginning to question whether it was a real thing. But it was.

I say this cover is purportedly a stereogram, because I am too smart to see them. At least, that’s what I told my friends in that era. They could see them. So if you see something in the book cover image to the right, let me know. Or you could just make something up, and I would never know.

I felt like that one guy in the film Mallrats.

The struggle was real.

Where was I? Oh, K-PAX. As you might remember, this was made into a Kevin Spacey film. Which is all I knew of the Kevin Spacey film except the basic conceit. The book is better than the conceit: It tells the story of the psychiatrist, the head of a small institute in Manhattan that works with hard-to-handle cases. The case at the core of the book: a young man calling himself prot who claims to be from the planet K-PAX. The psychiatrist works with him, and the book is structured around sessions the therapist has with the patient along with the psychiatrist (named “Gene Brewer,” which is the author of the book) musing about his relationship with his father and his family. The spaceman (played in the film by the Spacey man) offers some information that supports his assertions that he is from K-PAX, including sky charts from his homeworld, that check out to be true. He gets other patients to open up and start to heal. And he’s very good with animals. But as the doctor and an interested reporter investigate, they discover the disturbing story behind the patient.

The narrative switching up between the sessions and the doctor’s life were interesting and paced the book well. The story the spaceman told had enough contradiction and ambiguity that one wondered whether it would prove to be a spaceman or just a really gifted mentally ill person. Heck, there was a similarity between the doctor’s youth and the disturbing story so that I briefly considered whether the doctor himself might be the crazy one (hey, forgive me, I just watched Fight Club for the first time, and that was the most 90s of movies). But the resolution at the end was a bit disappointing, I guess, as it tries a bit to leave the ambiguity.

I see that the author has five books in this series. Well, I enjoyed most of this one, but I have to wonder whether I would enjoy more books in the story. They cannot all follow the successful plotting and framing this book has, so I’ll probably not hunt them down. They’re not the kind of thing that you see in book sales anyway, which leads me to believe that the others were not as successful as the first.

Oh, and above, I mentioned that this was a very 90s book. That’s because the Buddhist-flavored perfect world and communist society described by prot fits with the zeitgeist of the time, with the end of history and all that, but it really doesn’t resonate in the 21st century.

So worth a read if you’re into the whole “Is the person in the mental institution crazy or really a science fiction protagonist” subgenre.