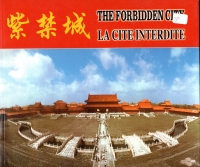 This book is a tourist take-away from the Forbidden City in Beijing. Its text comes in six or seven languages, and strangely enough the English text is often much, much shorter than the text from other languages. I have to wonder if the information is truncated for English speakers or if it really just takes that much longer to caption photographs in other languages. I mean, German, I can understand. But Spanish and French and the Asian pictogram languages?

At any rate, the book includes many full color pictures of the palaces and halls within the Forbidden City (but no terra cotta warriors, but I guess that’s a different place. The palaces look more opulent than the castles and other things I’ve seen from Europe, but the Forbidden City is a Ming creation, which means it’s a little younger and more modern than many of the medieval structures I might have previously seen. They’re still a head and shoulders above the things I’ve seen in Korean books (like this, this, or this), but China, especially Ming China, was a bigger and better empire than Korea’s kingdoms.

Also, I look at them, and I think, Man, those must be hell to heat. I’ve got a big house, and it can be expensive to keep it toasty in the winter especially if propane is expensive and the winter is cold. But, of course, these palaces did not use wasteful forced air heating. Instead of heating empty spaces, they heated the rooms where people were at any given time with fires and whatnot. So it was much less expensive to heat. But there was the risk of catastrophic fire, and one of the pictures shows evenly spaced well-decorated urns containing water to be used in case of fire.

So it was an interesting thing to look at during commercials in a football game. And, as an occasional Sinophile, I wouldn’t mind seeing it someday assuming it’s not destroyed in any upcoming military conflict.