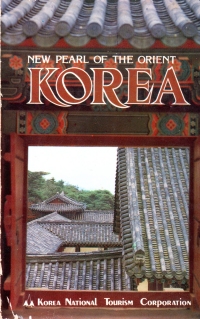 This book is one of the Korea-centric books I bought this spring in Clever. Like the first two I read, it’s a tourist-focused book. As a matter of fact, the Korean government’s tourist arm put it out. So it describes places to go and to see in South Korea and highlights some of the customs, traditions, and other cultural facts about the country that might interest a viewer, so it’s got an added dimension that the purely artifact- and location-based tourist tracts don’t.

On the one hand, the material I’ve read has covered a lot of the same ground and has been location- and artifact-based books I’ve read. But in reading similar material over and over again, I’m starting to pick up a sense of Korean history vicariously. I know when the Silla dynasty came to power, and I’ve got a sense of when the Yi (or Chosun) dynasty came to power. Although I lack detailed knowledge of the ins and outs of the history and the invasions, I’m getting a very high level sense of them. I’ve got a couple more books on Korean art to go through, and I think some of it will stick just from the repetition. Good for me.

At any rate, this book is an interesting artifact of its own in that it brags about different locations with all paved roads or mostly paved roads by 1980. I can laugh, because I live in Greene County, Missouri, one of the few counties in the state whose (public) roads are completely paved (although I’m not too far from some unpaved Christian County roads). Also, the book talks about driving four hours from Seoul to visit a location. I’m not much of a traveller, but it doesn’t appeal to me to fly some dozen hours to a destination and then drive eight hours round trip to another location. Perhaps that’s geared more toward the people who travel to Korea for a month or something.

I’m glad I’ve picked these books up and have looked through them. And I’m absolutely ready if one of the local trivia nights has a category called Korea. Well, that’s overstating it: a lot of this washes over me. But I’m more prepared than many people.