I did not know that Rogersville had its own library; I don’t remember seeing it when I went to town for the old Missouri Insight blog (reposted here). As an old railroad town, it would have had the opportunity to create its own library before the Springfield-Greene County library or Webster County library took root.

So I discovered it had a Friends of the Library organization and a small book sale fund raiser, I was all on it. I stopped by early Friday morning. It was held in a small conference room off the side of the small town library. How small? It might have been the smallest I’ve ever been to. Smaller than Clever, for sure.

I only bought three things. 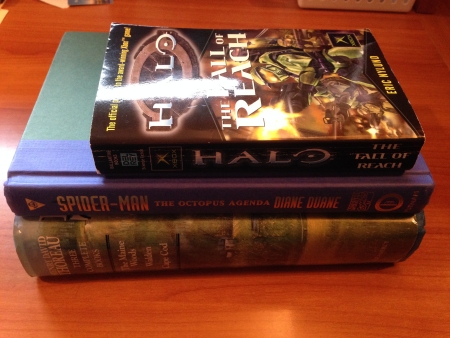 Not much, but it wasn’t a big selection. No t-shirts or applications to join the Friends of the Rogersville Library, sadly, or I would have added those to my collections.

And since I recently cleaned part of my library, I had room for them easily. So I should be in pretty good shape until the autumn book sales unless I hit a mother lode at a church sale or something. You don’t see many books at contemporary single family home garage sales.