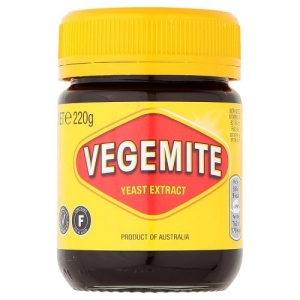 On a lark, I ordered a small jar of Vegemite, the Australian sandwich spread. Come on, you know, the one mentioned in Men at Work’s “Men Down Under”:

So yesterday was the day to try it out. I made a sandwich for myself and a couple small quarters for my children to try, and….

I had one bite. Which I managed to chew and completely swallow. Although not in the time it took me to throw the rest of the sandwich out.

Never in my life have I had a hankering for a beer/sardine/salt/coffee sandwich.

Although my children started complaining about it before it was served in their normal resistance to something new, I came to agree with them, and they tried it themselves after I took my bite and reacted comically to it.

I mean, I grew up in poverty, but my family was not poor enough to serve this.

I’m blessed to have grown up in a bountiful land where one can go pick food from outdoors instead of a desert surrounded by twenty-foot-long crocodiles.

The wikihistory of Vegemite is that an entrepreneur wanted to make a food out of industrial by-products. And he did it.

God help me, I saw in the Wiki entry that they use it as a pastry filling. I suspect that the Australians do this to keep other people away from their doughnuts.

You know why Australian rules football is so vicious? The winners get a Vegemite sandwich. The losers get a year’s supply of Vegemite and a sixty-DVD Paul Hogan complete film set.

It does give me a couple insights into the Men At Work song, though. Now I know why Australian men chunder.

Needless to say, of the 220 grams of Vegemite shipped to Nogglestead from England, the total consumed was probably a gram before I dumped the jar in the garbage. Which I’m frankly afraid to admit on the Internet lest it’s a felony to dump Vegemite in an American landfill.

2 thoughts on “Reflections on Vegemite”