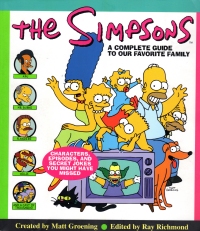 I don’t know where I bought this book, but I know why I picked it up recently: because my soon-to-be ten-year-old has recently acquired a taste for all things Simpsons from a couple of books he’s gotten, and he wanted to read this one, but I wouldn’t let him until I’d read it. In a manner befitting Bart and Lisa, he asked me repeatedly, multiple times daily, whether I was reading the book yet and, if I was not doing anything, whether I could not better spend the time reading the book.

It’s an episode guide to the shorts from The Tracey Ullman Show and the first eight seasons of The Simpsons. Not to make you feel old, old man, but this is a twenty-year-old guide to The Simpsons. Apparently, there has been at least one additional book for completeness’ evolving sake. For each episode, there’s a synopsis, a character highlighted, a number of jokes you might have missed, some notable quotes, ties to other Simpsons episodes, and things to identify what movies or whatnot the episode lampooned. After each season, there’s a compendium listing of things like the times Homer says, “D’oh!” or “Mmmm….” That’s about it. Much to my child’s chagrin, it took me a number of weeks to go through the complete book, as I could only make it a couple of episodes at a sitting.

Of course, what’s a good book/episode guide without double-effect nostalgia. As I read the book, I see the air date at the top and remember what I was doing around that particular time. Watching The Adventures of Beans Baxter instead of the Simpsons on Fox; graduating high school; going to college; working in a grocery after college; receiving the email from the woman who would become my wife; and so on. Additionally, I started watching the Simpsons on DVD around 2004 (as mentioned here), so some of the episodes are familiar from my pre-parental, stay up until two o’clock work-from-home days (as opposed to my current parental stay up until nine o’clock work-from-home days). So I remember watching them on the eMac in my office as I worked or after I finished work or live-blogging the Republican National Convention of the era.

The jokes, the humor, and their relevance remain but change over time. Much of the stuff lampooned still holds true, although some of it might seem dated to kids from today. But not all of it. And sometimes you can apply the gags to your own life. For example, I read Bart saying Branson is like Las Vegas if Ned Flanders ran it. I read this in Branson on vacation this week. So it’s not quite Jeopardy!-esque as the nexus of all knowledge, but.

At any rate, interesting as a fill-in reader for moments when you don’t have a lot of time for Kierkegaard. Or to educate your children on late 20th century animation.